Welcome to Drinks and Drives Magazine's "Beer Diary," the highly anticipated segment of our magazine where we tell you about a whole bunch of outstanding beers that you should, well, drink right now. Some of them may be well known, highly sought after staples in the craft beer community, while some of them might just be beers you've never heard of from brewers hidden throughout the country. Regardless, all of these beers are certified delicious, and we would encourage you all to try them.

Check out this awesome beer from Mast Landing Brewing Company in Westbrook, Maine. Their recently released “Dash IPA” is a clever creation with some unique flavors for an India Pale Ale. Fairly hazy and orange-gold in color, Dash IPA boasts a gentle balance between juice and hops, with notes of citrus, stonefruit, and pine, accompanied by some subtle white grape tones.

The beer finishes soft and dry, and welcomes another sip almost immediately. It always feels like a gamble when I notice a new Mast Landing beer in my local craft beer distributor because their labels can be vague and they do not make it habitual to describe their beers on the can like many others will. However, I do have yet to find a Mast Landing brew that I am disappointed with, so I do generally feel like the odds of approval are in my favor when I approach the counter with a 4-pack of one of their beers. If you are unfamiliar with the guys and their production, they are definitely a brewery to check out. While their slightly secluded location near Portland, Maine seems desolate, if you’re in the New England area you have a good chance of finding their beers at your nearest craft beer supermarket- so keep your eyes open next time you go to refill your beer stock!

When it comes to good IPAs and experimentation with IPA styles, SingleCut Beersmiths out of Astoria, Queens NY seems to be the East Coast resident expert. Subjectively one of the coolest breweries around, SingleCut has such an intense production cycle, and it seems like every few days they have a new limited release that you must find immediately (read: at their brewery) if you ever hope to get a chance at drinking it. Fortunately for us non-New York residents, they do have year round full-production offerings that will generally remain unchanged in recipe. One of my personal favorites of one of those such beers is their 18-Watt Session IPA. This was probably one of the first beers I believe I ever tried from SingleCut, and since then it has remained up there in my top-five list of sessions. Pouring an alluring deep orange-almost amber color in its center, 18-Watt shows all the similar characteristics of a much heavier SingleCut IPA.

The brew has a nice dank and citrusy aroma accented by a pleasantly bitter lupulin scent that complements the haziness quite nicely. The flavor of this beer is very much so in alignment with its appearance and aroma. Think zesty orange, resinous pine, and a drinkable floral dankness contributed by the hop bill. The beer is also surprisingly juicy and dense for such a light (5.0% ABV) IPA. Smooth and soft on the sip but crisp and clean on the swallow, you’ll still get those subtle hints that are common with these sessionable brews, but overall you’ll definitely feel like you’re drinking a beautiful monster of an IPA

Hopefully you’re not tired of IPAs just yet- next on this issue’s list is another one with a little bit of stylistic variation to it. Brewed by increasingly popular Industrial Arts Brewing Company out of Garnerville in New York’s Hudson Valley area, these guys are known for taking classic styles and modernizing them with some clever and crafty innovation. Their beers are excellent examples to show domestic pilsner lovers as an introduction to all that craft brewing has to offer.

Wrench IPA is a bad ass rendition of the increasingly popular hazy, juicy, and hoppy New England IPA style. The color of the brew speaks for itself, but don’t worry- you won’t just be sipping on a Tropicana-inspired alcoholic orange juice. Definitely citrusy in aroma, but there are some cleverly introduced notes of tropical fruits like mangos and pineapples, with a peachy finish that takes you back home. Nice and smooth and soft on the palate, this is always one of our go-to beers on those rare balmy New England winter days.

As far as New England or Northeast IPAs go, Wrench has certainly created quite a reputation for itself. It provides such a well-balanced example of this style of IPA with its aromatic, piney, and citrusy aroma that gracefully attacks the nose; juicy-but not too juicy-flavor; and foamy, creamy, and just slightly chalky mouthfeel and finish. It’s seriously such a great introductory beer for this style.

For good measure, we might as well offer up one more modern classic example of the NEIPA style; Sloop Brewing Company’s Juice Bomb IPA. Another Hudson Valley-based New York brewery, Sloop has locations in East Fishkill and Elizaville. They are an incredibly well respected brewery here in the east, and they really know what they’re doing when it comes to unique craft beers that have their own style. Their can art is always bright, colorful, and cartoonish, and it is certainly a reflection of their beers.

Sloop’s Juice Bomb IPA, in particular, is one of their staples. It was the first beer I ever tried by them, myself, and I was instantly impressed by its quality. Juice Bomb has everything you’d expect out of a NEIPA brewed by a top notch brewery, and then some. It’s packed with tons of juicy citrusy flavors and a super smooth lightly carbonated mouthfeel; but the beer also surprises with a delicious touch of hop aromas that cut through the body of the beer and serve as a welcome reminder that this beer is still an IPA at heart.

What’s even cooler is the fact that Sloop is also known for releasing beer series that showcase and highlight different hop varietals within the same style brew. They have a bomb series of releases that all incorporate different hop flowers as the focal point of the beer, as well as a double dry-hopped double IPA series that does the same thing. Reminiscent of those old high school science experiments your wacky teacher would make you create where controllability of variability was of utmost importance, Sloop does just that with these releases by keeping most of the ingredients consistent except for the hop schedule, and I think that’s just awesome.

One of my all time favorite rotational beers on release right now is the Powder Dreams series out by Captain Lawrence Brewing Company. Any time I see another one up on the shelf at the local brew store, I snag it immediately before anyone else has the chance to take it.

Hops and dank haziness truly shine in just about every version of this beer I’ve tried so far, and they always come together in a delicious show of juicy, floral, and piney american hop flavors. In this particular strain the lupulin powder creates a foreshadowing array of sediment that really adds to the texture and mouthfeel of the brew (think full and smooth, but with a little bite). Bottom line, if you can still find this one on the shelves of your local store, go grab it before I do!

I don’t think unfiltered, hazy IPAs are going anywhere any time soon; something about their juicyness, their drinkability, and their complexity is just so appealing for brewers and drinkers alike. Rogue Ales’ spun out their own gorgeous new concoction for this category of brews: Batsquatch Hazy IPA.

If the coloring didn’t give it away already, this beer is TROPICAL and juicy, with a gentle touch of bitterness. It almost drinks more like a nice belgian wheat, but with all the wonderful flavors of a very drinkable low-malt hop-dominated IPA. It’s the middle of the winter here in the northeast, but drinking this one takes us to the Bahamas; that is, if the Bahamas had a mountain-dwelling mythical monster lurking around on its shores.

Purchase a copy of our first paper magazine issue! 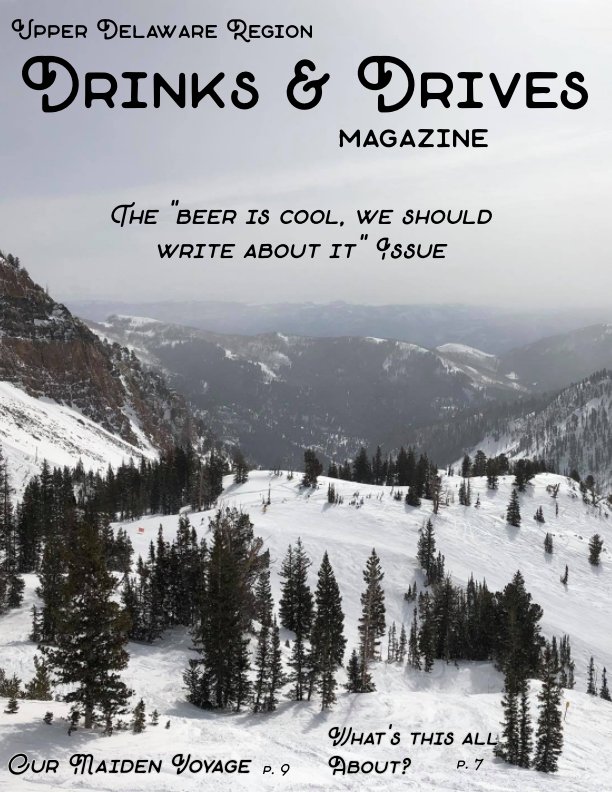